Myslivka village is located at the confluence of the rivers Ilnytsia and Svicha, at an altitude of 680 meters above sea level, near the section of the mountains Skolivsky Beskydy and Gorgany. In the north-west and east of the village the streams Yalovyi, Sapotiy, Sokoliv, Pyanky, Troyan originate. Historically, the village was originated in the place of settlement of German loggers in the second half of the 19th century and was seen on maps as Leopoldsdorf, the Polish name – Ludwikówka.

In 1913, a narrow-gauge road passed through the village, that has survived to this day in fragments at distant logging points. In the middle of the last century, the village had 860 inhabitants, most of whom were involved in local industry.

Myslivka is a very interesting and convenient point to start traveling through the valley of the river Svicha to the main Water shed (border with Transcarpathian region); on the Yayko-Ilemsky and Gorgan-Ilemsky ridges, in the village of Sloboda in the Zakarpattia region; on lake Synevir. Through the Hom ridge you can go to the valley of the river Mizunka. Also it was laid and marked with signs route to Mount Gurgulat, that is located above the village.

From Myslivka village to the nearest ski resort “Vyshkiv” – 10 km. Even if you have never been fond of downhill skiing, you should try it now!

“Vyshkiv” resort is located at an altitude of 800 m above sea level in the upper reaches of the Mizunka river, near the main Water shed. Here you can enjoy marvelous views of the Carpathian peaks, picturesque valleys, mountain rivers. There are two ski lifts in Vyshkiv. For skiers the resort offers two trails: one is laid on the Zaloma mountain with a height difference of 300 m and the second – on the Cheremshyna mountain with a height difference of 150 m.

The main ski track (1000 m) is wide and provides a long descent with slow skiing, that is ideal for beginners and people with little experience of such activities.

The water pearl of Transcarpathian region – lake Synevyr – is located in 70 kilometers from the “Beskyd” mineral resort. It is assumed that it was formed more than 10 thousand years ago at the intersection of fast rivers and young mountains, at an altitude of 1000 meters at sea level. Now the lake receives water from four sources and covers an area of 7 hectares. The depth of the lake reaches 22 meters. In the middle of the lake there is a small island, that gives the water a special charm. Synevyr is also called the “Sea eye of the Carpathians”, because of the similarity of water color with seascapes. An interesting feature of the lake is the constant presence of water within its shores.

The nearest settlement is the village of Synevyrska Polyana or Verkhniy Synevyr (old name), founded in 1921. The village has an ancient architectural monument – a wooden Pokrov church, built a century before the village was originated. The picturesque Tereblya river flows through the village, very close to the Synevyr national nature park. You can also visit the Museum of Forest and Rafting, located near the village, buy souvenirs, join the local folklore at the art festival “Trembitas call for Synevyr.” In the hospitable village of Synevyrska Polyana tourists will always find accommodation and the necessary help.

Guests of the “Beskid” mineral resort can take a tour to Ivano-Frankivsk, located in an hour and a half way by car. Ivano-Frankivsk is a city with a centuries-old history, ancient traditions and extraordinary cultural life. There are 5 architectural monuments of national importance and hundreds of local ones. The old city buildings are dominated by the heritage of Austria-Hungary and the Polish-Lithuanian Commonwealth. The city has the atmosphere of European province. Here you can slowly drink coffee in one of the squares, visit the numerous art galleries and the city museum of painting, with pleasure to run through the souvenir shops in the center and relax in one of the city parks.

Ivano-Frankivsk has many bars and restaurants with a museum atmosphere and the area of old Galicia. Here you can taste colorful Galician cuisine, made of natural products according to ancient recipes.

We also offer transfer and excursion to Lviv – the most visited city in the Western part Ukraine. In two and a half hours you will reach a place, called “Eastern Paris” – Lviv and its environs.

The central part of the city is full of architectural monuments, including the Potocky Palace, the High Castle, the Lviv Opera House, Rynok Square and St. George’s Cathedral. Uniqueness is given to the city by narrow streets and old houses, on the lower floors of which there are the famous Lviv special pubs and restaurants.

Music, fun, hospitality and numerous festivals in the city squares will immerse you in the whirlpool of an unquenchable holiday, from which you can relax only in quiet local churches. There are both walking and car tours at your disposal, which will allow you to see as many sights as possible in this beautiful European city.

Excursion to Mukacheve will bring additional charm to your vacation in the “Beskyd” resort. We will move to the Transcarpathian region – with its grape valleys, mild climate and beautiful castles. The legendary castle “Palanok” will definitely attract your attention. It covers an area of almost 14 thousand square meters and rises above the area by 70 meters, as it is located on a mountain of volcanic origin. “Palanok” withstood many enemy sieges, the longest of which was the Austrian one, that lasted three years (1685-1688). At that time the castle belonged to the Hungarian princess Ilona Zrini, who led the national liberation movement of Croatia and Hungary against the Austrian Empire. In the northern outskirt of Mukacheve on the slopes of Chernecha mountain there is another historic building – St. Nicholas Convent. Its history began in the 11th century, when close family and friendly relations were established between future Hungary and Kyiv Rus. Andrash, the heir of the Hungarian throne, was raised at the court of Yaroslav the Wise and married one of his daughters. Together with Anastasiya Yaroslavna the monks of the Kyiv-Pechersk Monastery arrived in Transcarpathian region, founding the first Orthodox monastery here. Further documentary evidence of the existence of the monastery dates back to the XIV century. According to the Mukacheve chronicle, Prince Fedir Koryatovych came from Podillya to Hungarian Rus in the summer of 1339 to serve the Hungarian King Karl I, who gave him possession of the Mukacheve dominion.

You will learn this and other historical information during a wonderful educational tour, conducted by local historians. You will also be able to enjoy excellent Transcarpathian cuisine, taste elite wine or Transcarpathian cognac in cozy bars, cafes and restaurants in Mukacheve. A convenient transfer will bring a lot of pleasant travel experiences.

In Dolyna town there is a museum “Boykivshchyna” – the first museum in Prykarpattia, dedicated to the history of the local region. The museum was opened in a new building in 2003 during the 1st World Boyks Festival. The construction was facilitated by the charitable foundation of Antonovych’s patrons, living in the USA. In the museum you can find a lot of information about the historical heritage of the Boyks. The reproduction of the exterior and interior of the classic Boyks housing is of considerable interest. Real furniture, household items, tools, national Boyks costumes, as well as Easter eggs, embroidered with colored threads, a collection of dolls, religious objects of the 16th-18th centuries, archeological finds are presented.

We also offer you interesting excursions to the legendary Dovbush Rocks, to Greek Catholic monasteries: the Goshiv Monastery and the Nativity of the Blessed Virgin Monastery; as well as trips to the Shandra tract and the mountain river Svicha. If desired, we can arrange a transfer to such well-known tourist resort areas as Halych, Yaremche, Truskavets, Morshyn, the regional center of Chernivtsi. 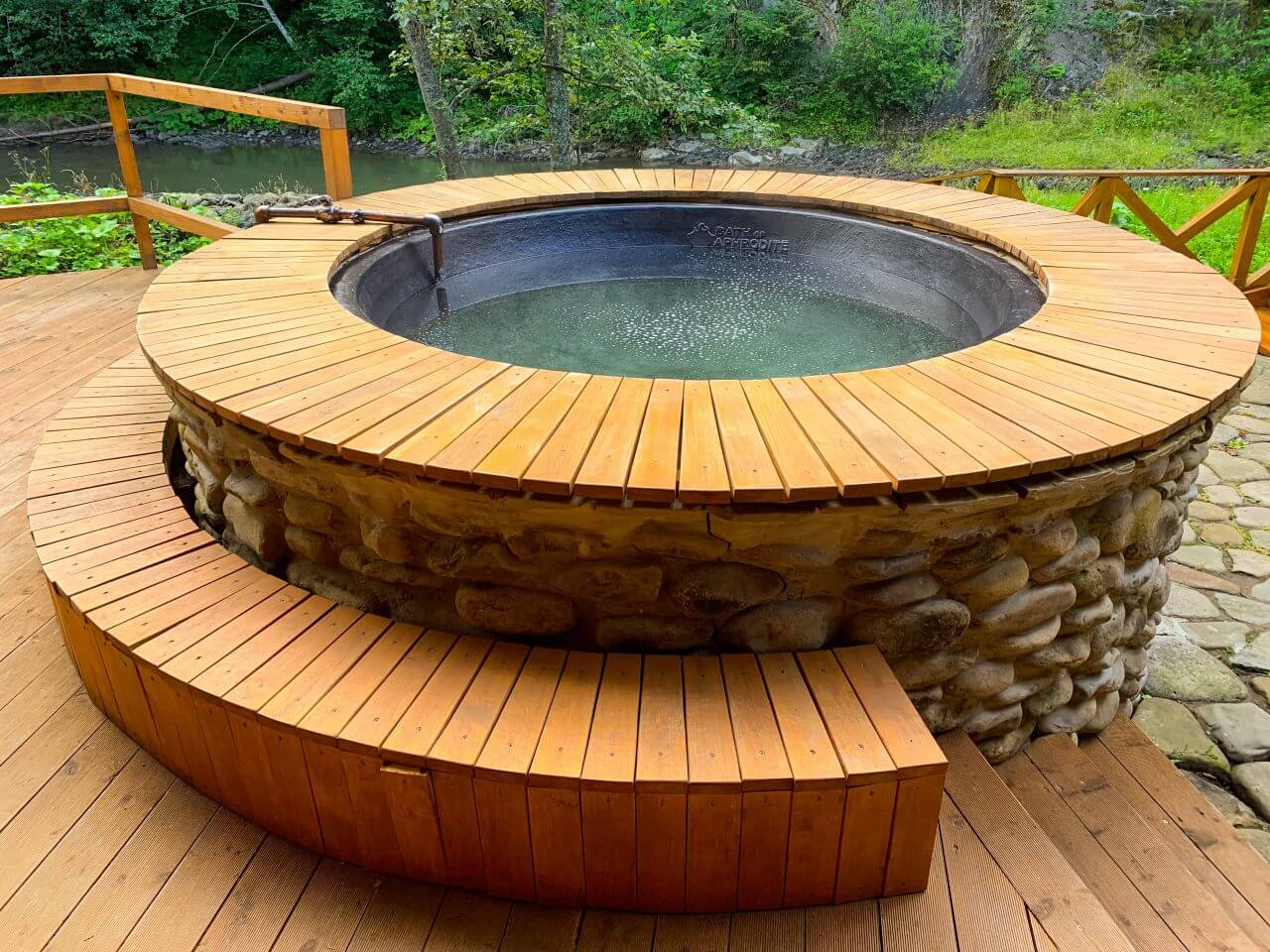